I knew there was a huge potential that the day could be a bust.

It was the first market after the holidays and the temps were in the upper 20’s to low 30’s.

But, I had decided that participating in live markets this year was important to me and I just couldn’t miss the very first opportunity.

I spent quite a bit of time the previous week getting paintings prepped, making a new sticker display, making new signs, shopping for hot hands and overthinking about everything.

I packed the car the night before and made sure I had enough small change.

I layered up, put on an extra furry beanie, made some hot tea and left while it was still dark and foggy.

Something about being by myself that early, products and displays clanking around as I drove and the potential that the next few hours held, infused me with a buzzing energy.

Moving all the big stuff made me sweat and take my coat off.

I was hopeful that it really wasn’t as cold as I assumed outside and hence, wouldn’t keep too many people away.

As I awkwardly tried to set up my pop-up tent alone, a bundled and beanied man in an orange mask appeared out of nowhere and helped without saying a word.  I said thank you over and over and he just nodded.

By the time I was putting out stickers, hooking chains to signs and hanging art on my peg board displays, my frozen fingers knew the truth.

It was going to be a slow day- Texan’s do not like the cold. 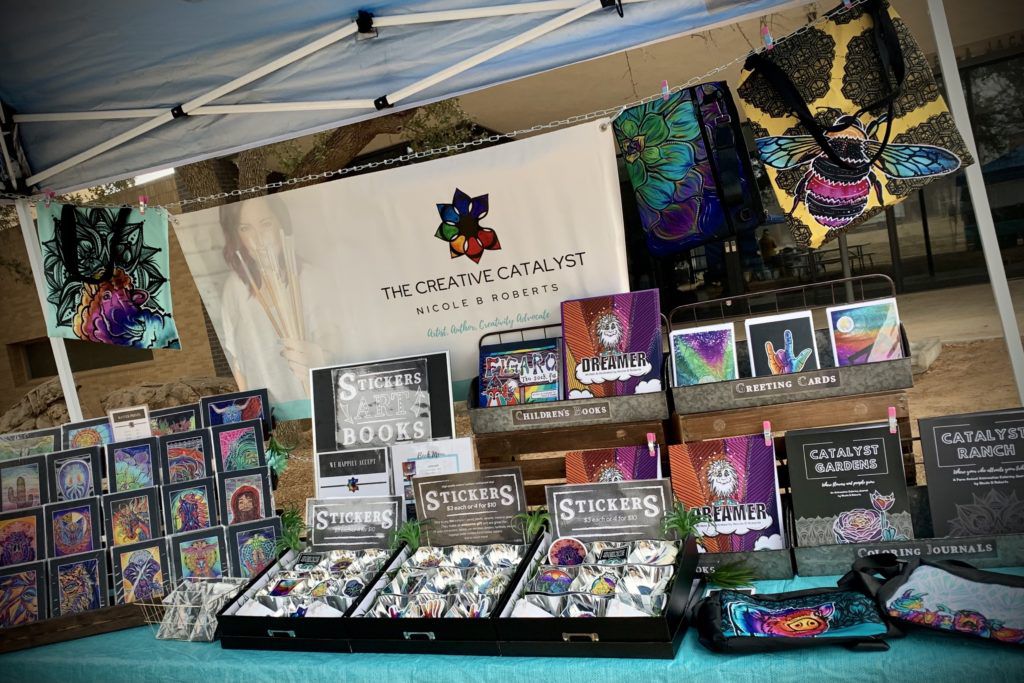 Finally ready, I settled into my turquoise chair, wrapped up in my faux cow skin blanket and shook the hot hands I had purchased to life.

I chatted across the way with other vendors.  The ones who had been equally hopeful that the cold would not deter the crowds.  The people were warmer than the weather and I remembered that this human connection is part of the reason I wanted so badly to be a part of the markets this year.

As I scanned the area over and over, I was fascinated with the idea that none of these people were trying to get rich.  They were all trying to make enough to break even plus a little extra. Most of these cookie bakers and jewelry makers, blanket crocheters and macramé weavers, produce growers and salsa purveyors…

They were all just trying to share the things they love with the world around them with the hope that they could keep doing it.

It seemed that Farmer’s markets were really just passion fairs wearing the skirts of grassroots capitalism. 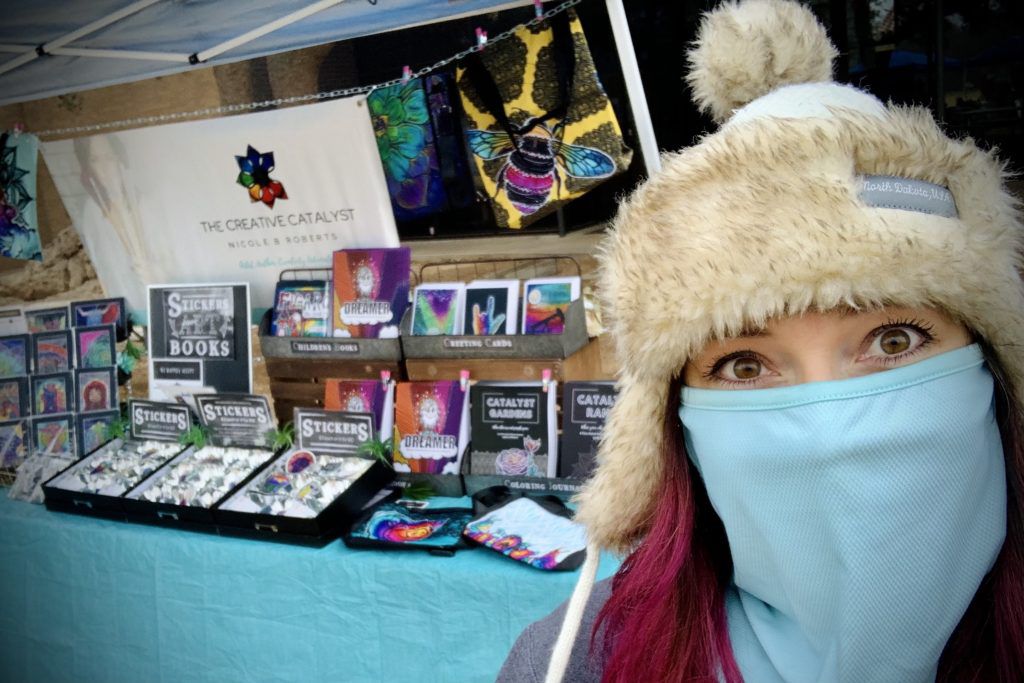 The dog crowd seems to come first.  The ones just trying to get out and socialize their pup.

I scratched under the chin of a brindle French bull dog in a plaid coat.  I giggled at two Corgi’s pulling their owners along like heroic sled dogs.  I admired an elegant black poodle with a red felted rose on her collar. I felt sympathy for the shivering chihuahua who was ultimately scooped up into a minky blanket by his owner and carried away like an infant.

Some friends who had made purchases from me before introduced me to their big, very energetic 9-month-old brindle shepherd.  He seemed like a beautiful handful, but they were up for the task.

Some of the older folks getting out for a morning walk joined them, all of their glasses fogging as they strolled.

I met the girl from across the way.  She told me about the recycled cotton cord sourced from Spain that she used for her macrame projects.  Her colors were an array of muted rainbows and I loved them.  As I sat in my turquoise chair with a clear view of her offerings, a piece hanging from a rustic branch, with natural creamy cotton and a hint of navy teased me.  I imagined where I might put it in my house, how it might like next to my blue velvet chairs.  I wondered if I had the perfect place. I didn’t buy it, but I wanted to.

She looked at my stuff too.

“I love all things moon,” she said, as she selected the moon cycles holographic sticker. “Me too, girl, me too.”  I was happy to have made a new friend. 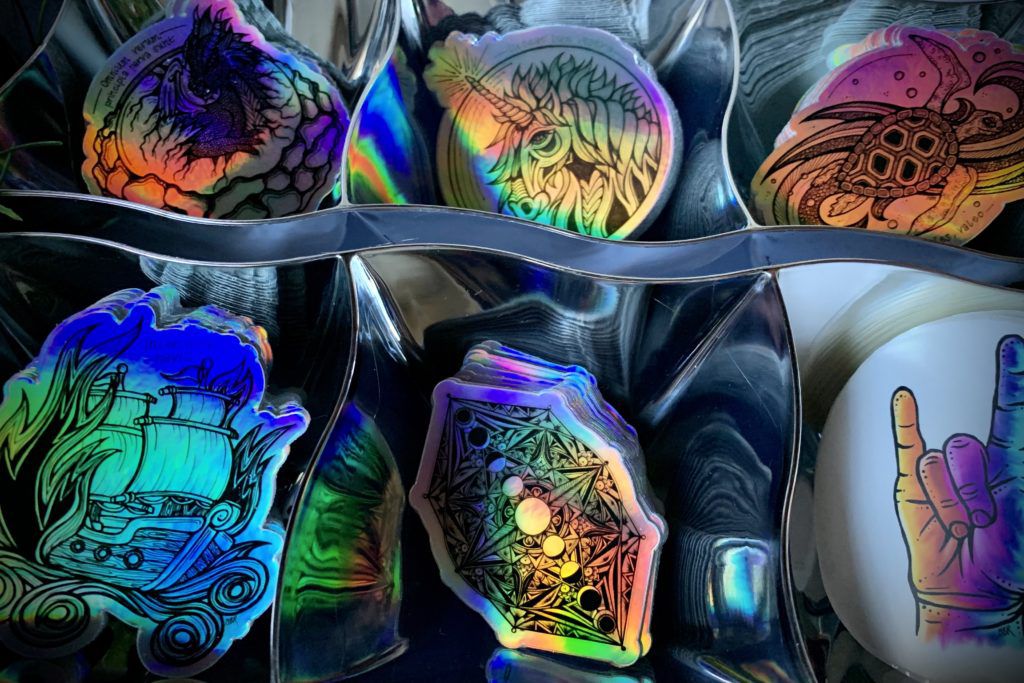 The 10am surge that normally happens… didn’t.

It slowed progressively and seemed to get colder.

A woman I had seen walking by earlier in bright red Nike tennis shoes and an all grey outfit stopped by to peek at my offerings.  She told me she was normally a vendor of baked goods, but wasn’t participating today.  She told me about how careful she had to be about what markets she participates in.  As a fresh food maker, if her items didn’t sell, she would have to donate them.  She couldn’t save them and sell them another time.  It changed my perspective a bit and made me grateful that if my products didn’t sell today in the cold, they would last forever until they found the right home. She told me about her granddaughter, she mentioned other markets and offered lots of encouragement, tips and resources.  Then she meandered off to talk to other vendors.  “I gotta say hi to all my friends,” she said as she walked away in her bright red shoes.

I finally had my new booth friend keep an eye on my things and shuffled over to buy a “sin-full” cinnamon roll from the closest food booth to satiate my growling tummy. I picked pecan cinnamon and went back to my turquoise chair and cow blanket to devour it.  I wished I could warm it up, but It was delicious anyway.

By around 11, most vendors started packing up and I joined them.

But a few people I had met at previous markets caught me before I could put it all away.

I was overjoyed to see them.

First, I noticed the scarf. Bold, bright colors, intricate patterns knitted with fiber and persistence.  I couldn’t remember her name in real life, just her Instagram handle.  We chatted like old friends while she picked some new stickers.  She told me about her husband’s beer fridge that displayed his sticker collection.  She still wasn’t sure where to put hers.

As she left, I said “goodbye sleepy little dragon”, we laughed and talked some more about the awkwardness of online friendship vs. real life.  Then she told me her real name.

Another girl has come to the market every time.  Last time she bought a print of my farm animals.  She is vegan and planned to hang it in her kitchen.  This time, she came back to show me a picture of how it looked framed.  Her boyfriend was with her, who eats and cooks meat in the same kitchen.  She joked about how the animals were always watching him, he laughed and assured me he didn’t care that they were.  She bought a peace sign sticker for the bumper of her bicycle.  I’m not sure where she is from, but she has a beautiful accent and a sparkling face, even from behind a mask.  She asked me if I had any Iris flowers.  The very particular request took me by surprise.  I had ordered some only 3 days before.  Just that one, exact flower.

My name is Iris, she said.  I promised to save her one and she promised to come back next time. 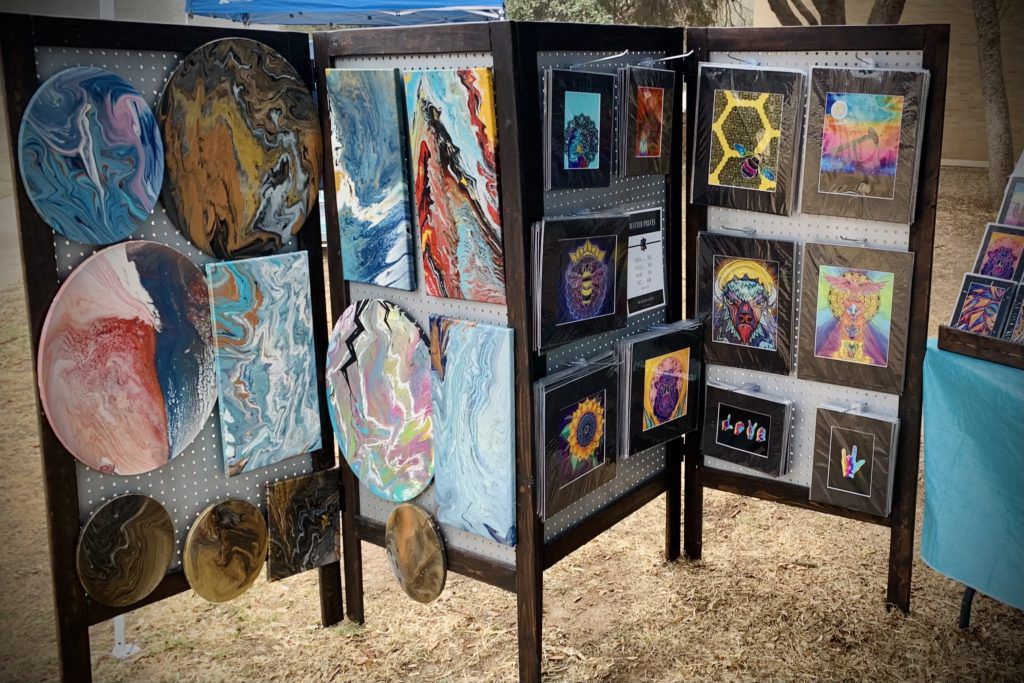 By the time I finished chatting, most of the other vendors on my row were already packed up and gone. I quickly finished putting my stuff away and pulled my Suburban as close as I could get it.  I’d carry a load to the car, then plunge my icy fingers into my hoodie pocket and let the hot hands revive them while I walked back.  Then I would do it again.

All that was left was my tent.  I pulled the stakes, popped the legs down and slowly walked each corner in, an awkward but doable process alone.  To get the storage bag on I had to squat slightly, and squeeze the tent like I was giving it a bear hug with my legs while I tried to align the bag in the right spot, on top.  A maskless man with a gun on his hip must have felt sorry for my state.  He ran over, and again without a word, helped me get the bag over the tent.

“Thank you so much for your help,” I said with a slight chatter in my teeth.  He nodded, smiled and walked away.

I found it ironic that the market ended the same way it began, with wordless strangers helping for no reason.  Kindness without expectation.

As I drove home, I felt disappointment mixed with relief.  Disappointed that the day was a bust, but relief that failing in real life was not nearly as bad as anxiety had made it out to be in my head.  I told myself that I was more free now that I had gotten that fear out of the way.  Knowing that all the other vendors were in the same boat that day, softened the blow and reminded me of Theodore Roosevelt’s words, 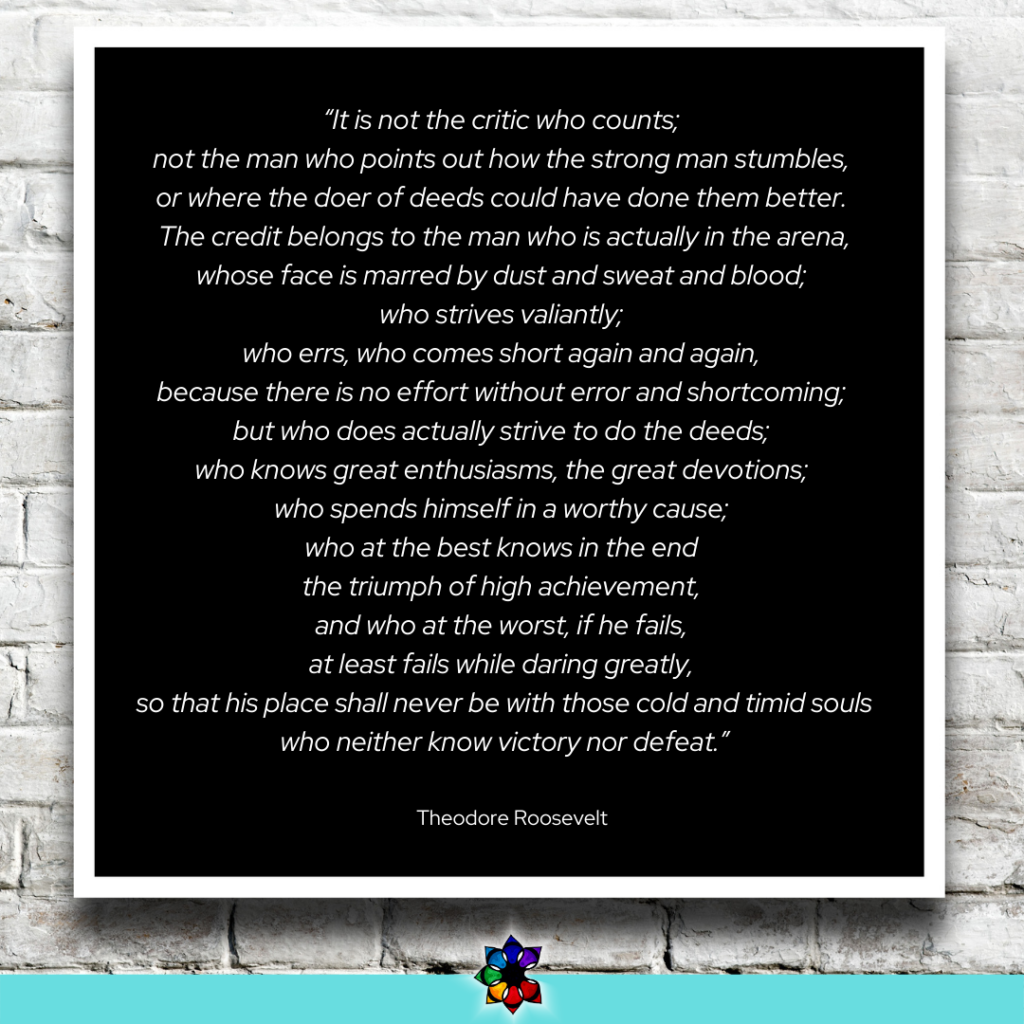 As I look back at the day, I realize that it was not a bust at all.

What I lost in income, I gained in the kindness of strangers and new friends.

Though the weather left my extremities tingling with cold, the people warmed my heart in a way that profits never could.

And now I know that putting myself out there is never a waste, as long as I am willing to look for value in unexpected places.  I remembered that daring greatly and taking action is its own reward and offers a sense of peace that wish-filled thinking never can.

Come see me at the next market. 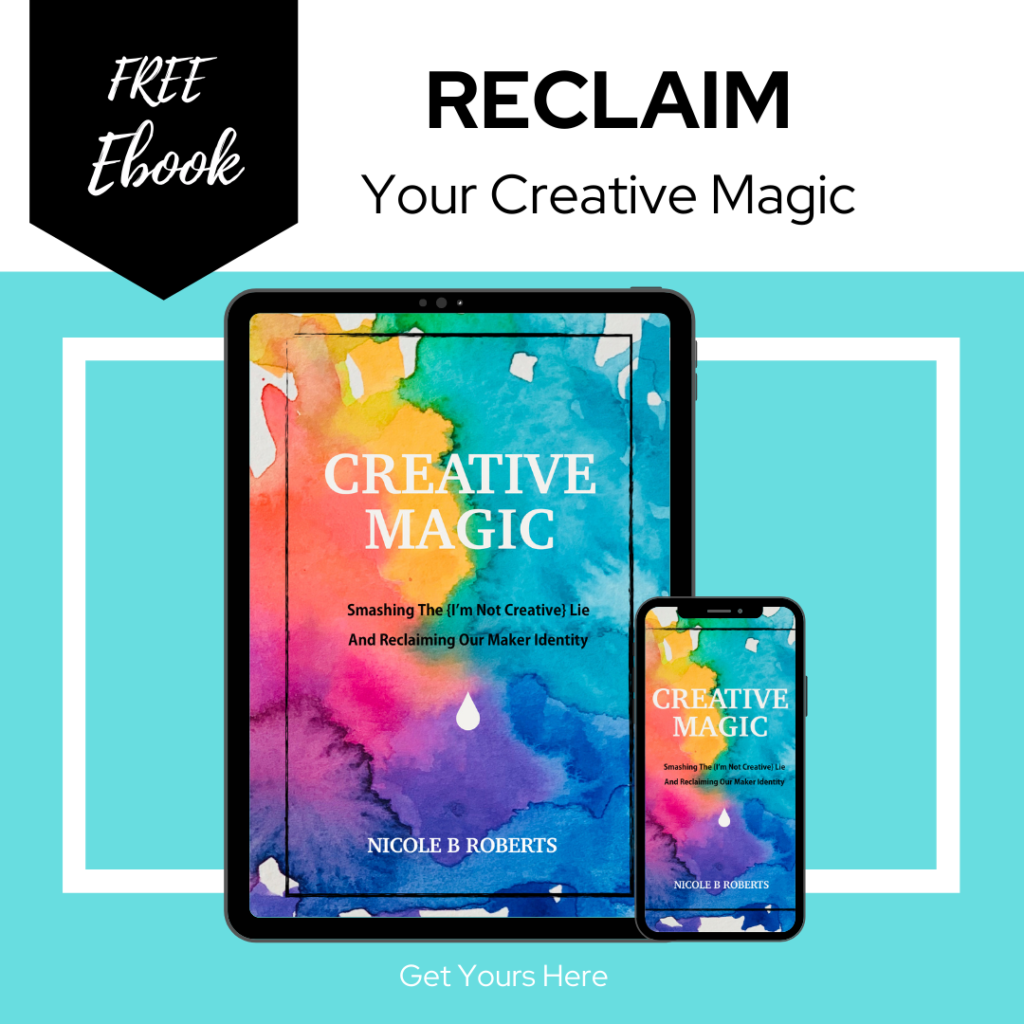